Welcome to AS Mobile Solutions.

We were established in 1964, starting with radios and eight track tape players, leading to modern multimedia systems for quite literally planes, trains and automobiles today. Not to mention motor yachts, motor homes, caravans and full size luxury coaches.

Our team of fully qualified and highly experienced auto electricians are well suited to meeting the fitting needs required for all vehicles within the bus and coach field. This strong team joins our comprehensive workshop facilities, enabling all vehicle types from minibuses to double deck coaches being handled.

The bus and coach systems segment makes the most of our 35 year relationship with leading technology and services company Bosch, including product exclusivity in the process. We provide a large quantity of our own Autosound coach multimedia system products, which can be found throughout the sections of this website, along with other reliable ranges from Blaupunkt and Funtoro. 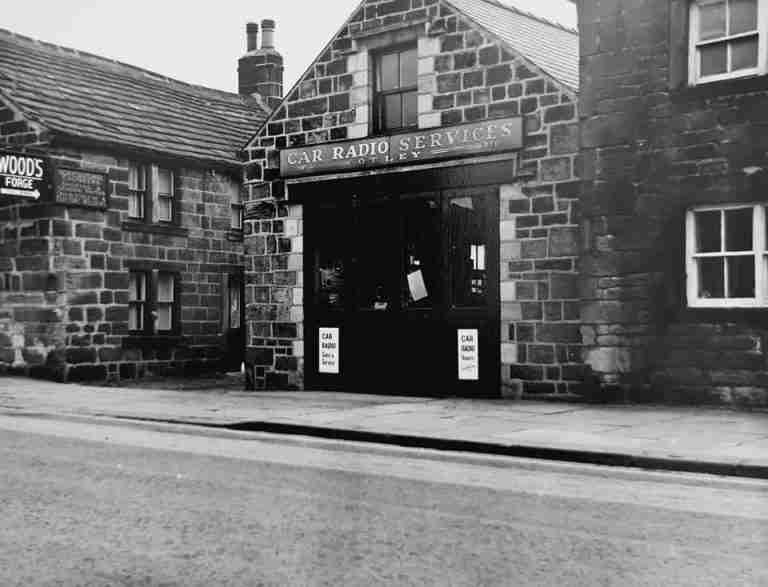 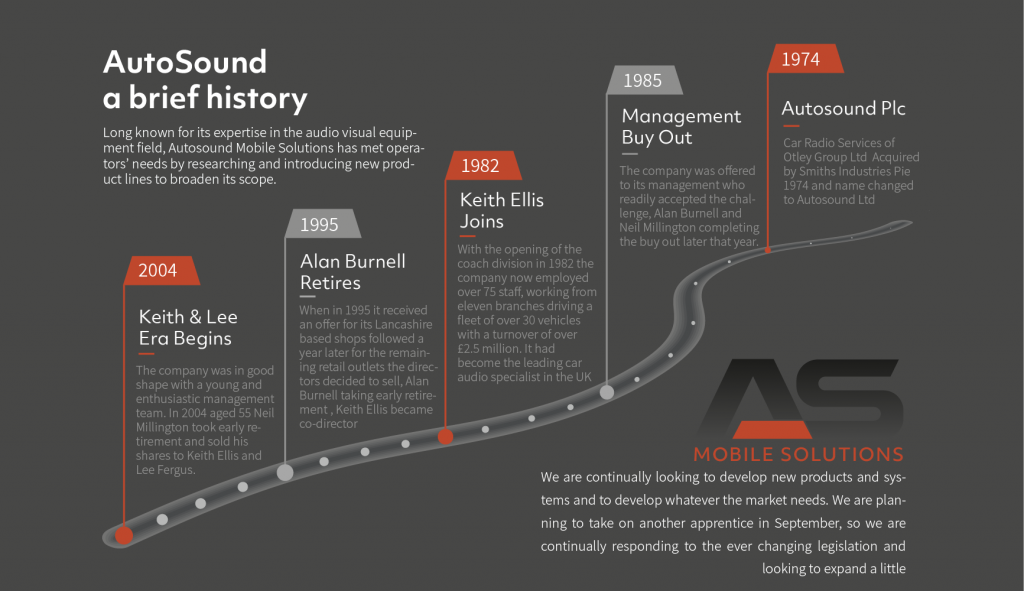 The company was founded to supply car radios and related products to the motor trade and retail market through a team of mobile installation engineers.

The company chose Otley because of its low start-up costs and central location for car dealerships in Leeds, Bradford, and Harrogate.

As the company attracted the retail market, additional branches were opened in York, Leeds, Bradford, Manchester, and Sheffield over the next nine years.

Smiths Industries was heavily involved in supplying the motor industry and purchased the company through their Radiomobile involvement, placing it in Group W, their aftermarket division alongside AF Factors, Bluecol antifreeze, and many other well-known motoring names.

Following this, additional branches were opened in Doncaster, Huddersfield, Oldham, Nottingham, and Liverpool.

The trade installation service still accounted for 50% of the business, but with the influx of Japanese cars, more and more cars were arriving with factory installed products. To meet these needs and expand the retail market, Autosound expanded its portfolio to include Alpine, Clarion, Fujitsu, Hitachi, Kenwood, Panasonic, Pioneer, Sansui, and Sharp, becoming the primary European service agent for Panasonic and Fujitsu original equipment. Diversification saw the addition of car alarms, sunroofs, electric windows, and central locking systems to the list of services provided.

With the threat of OE equipment, the company looked at other markets such as caravans, coaches, tractors, and commercial vehicles, frequently exhibiting at trade shows and fairs.

With early System 4 and cell phones providing a ready supply of quality customers, the communication market was rapidly developing. In 1980, Autosound was appointed as a main BT Celnet dealer.

With the introduction of the coach deregulation market in 1981/2, a further break occurred. Operators looking to develop continental tours quickly realised that video provided the ideal solution for relieving boredom on overnight journeys.

Autosound reacted quickly to this new market, designing its own equipment, modifying existing equipment, and relying on its existing installation, engineering, and suppression skills. The support of Smith Industries, a Footsie 100 listed company, reassured coach manufacturers and dealers that the company possessed the professional skills and financial standing to compete in this rapidly expanding and challenging market.

With the addition of the coach division in 1982, the company now employed over 75 people, operating from eleven branches, and driving a fleet of more than 30 vehicles with a turnover of more than £2.5 million. It had grown to become the UK’s leading car audio specialist.

Smiths Industries decided to exit the automotive business in 1985 and focus on its aerospace, surveillance, and medical operations. The company was offered to its management, who enthusiastically accepted the challenge, with Alan Burnell and Neil Millington completing the buyout later that year.

Showrooms were updated, display stands were replaced, and workshops were re-equipped to meet modern standards. The company expanded by capitalising on its two new markets, but it was always aware that the In Car Entertainment market was changing. When it received an offer for its Lancashire-based shops in 1995, followed a year later by an offer for the remaining retail outlets, the directors decided to sell, with Alan Burnell taking an early retirement and Neil Millington concentrating on the business.

Activities such as coaching and volunteering Keith Ellis, who had joined the company at the beginning of the bus and coach era, was appointed as his co-director.

With British Telecom looking to restructure its cellphone business, the opportunity to sell its customer base back to BT provided additional funds and security.

The company now concentrated on just two activities from one location. In coach entertainment and servicing audio equipment for Blaupunkt (bus and coach) Panasonic and Fujitsu (Toyota, Honda, and Mazda} The service department expanded, employing at its peak eight bench engineers repairing on average over 80 units a day. (Although this may sound a lot it equates to less than a 1% failure rate bearing in mind the number of Toyota, Honda and Mazda cars that are on the roads of Britain)

The coach division, which was now the sole UK distributor for the Blaupunkt Professional range, centred its operations on vehicle manufacturers, dealers, and leading operators. A network of specialist dealers was established to provide service and installation facilities further afield.

Many interesting projects have been undertaken and, of course, continue to be undertaken. Marine installations for sight-seeing submarines, rail entertainment for First Great Western, Harrods headphone installations, and the short-lived British Coachways There are dozens of football teams, all of which want the most up-to-date equipment.

By now the senior director had completed 39 years in the commercial vehicle and mobile entertainment industries. The company was in good shape with a young and enthusiastic management team. In 2004 aged 55 Neil Millington took early retirement and sold his shares to Keith Ellis and Lee Fergus.

WHAT OUR CLIENTS SAY

EXCELLENT Based on 10 reviews.

mr G
Spot on in job done and out great service

Mitch Rustem
Fantastic customer service and great product range. I bought a 6 x 4 speaker from these guys and spoke to them on numerous occasions. Received expert advice and support on each occasion. Would highly recommend.

SIGN UP TO OUR NEWSLETTER
FOR 10% OFF YOUR FIRST ORDER 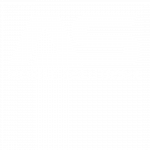 Thank you for signing up to our newsletter

Please copy the below code into the coupon field at checkout